Sexually Transmitted Infection (STI): What is it?

STIs (Sexually Transmitted Infections) are infections you get from someone else, or pass on to someone, if you have sex with them. Many STIs can be easily cured, but all are dangerous if left untreated.

How are STIs Transmitted?

Chlamydia is one of the more serious STIs. It’s important to get treatment for Chlamydia as soon as possible, since it may lead to sterility among men and a number of other complications among women. Antibiotics can cure Chlamydia. Not everyone with Chlamydia experiences symptoms. Those who do may notice a watery or milky discharge from the penis, an itchy feeling inside the penis, a burning feeling during urination or pain or swelling of the testicles.

Genital herpes is an STI that causes painful sores on or around the genitals. It’s the same type of virus that causes cold sores or fever blisters on or around the mouth. There is no cure for genital herpes, but there are treatments available that shorten its duration and reduce the pain. Genital herpes can be passed on through sex, oral sex or kissing someone who has the infection. It can be transmitted whether or not there are visible sores. When genital herpes is transmitted, it usually produces a tingling or itching in the genital area up to a week after sex. Next, a group of tiny blisters will be visible. These blisters later burst and become painful sores, lasting from two to four weeks. If you’ve had herpes once, the sores can return from time to time.

Genital warts are small bumps that grow on or around the penis or anus. They’re caused by a virus and can look similar to ordinary skin warts. These warts may show up from two weeks to eight months after having sex with someone who had the infection. Some people may carry the infection but not have visible warts. It’s still possible to pass on the infection if this is the case. Oral sex can also transmit the virus, leading to warts in or around the mouth.

Gonorrhoea is an STI caused by bacteria, affecting the penis, anus, rectum, throat or eyes. Antibiotics can cure Gonorrhoea, but if left untreated, it can lead to infertility in men. Gonorrhoea doesn’t always produce symptoms. If it does, they will be 3 to 5 days after sex. For men, these symptoms can include: a thick yellow or yellow-green fluid discharging from the penis, a burning feeling during urination, pain or swelling in the testicles, or pain, blood or other fluid from the anus.

Hepatitis B is an infection of the liver caused by a virus. It’s the only STI for which there is a vaccine. Most people with hepatitis B get well, but in some cases it can lead to complications such as liver disease or cancer of the liver. Not everyone with hepatitis B experiences symptoms. For those who do, the symptoms can show up two six months after the infection is transmitted. These include: a lack of appetite, vomiting, headaches, jaundice (yellowing of the eyes and skin), dark tea-coloured urine, light coloured stools, or a general feeling of not being well.

Hepatitis C is also a viral infection of the liver. It can lead to cirrhosis of the liver (liver damage), liver failure or liver cancer. Like hepatitis B, not everyone with hepatitis C experiences symptoms. If there are symptoms, they may show up six to nine weeks after the infection occurs. These include: fever, jaundice (yellowing of the eyes and skin), a pain in the stomach just below the rib cage, nausea, dark tea-coloured urine and tiredness.

AIDS stands for acquired immuno-deficiency syndrome. It is a very serious STI, transmitted through blood, semen, vaginal fluid or breast milk. AIDS is caused by HIV (human immuno-deficiency virus) which harms the immune system, preventing the body from fighting certain infections and cancers. This can be fatal. At present, there is no cure for AIDS or HIV. It’s possible to have HIV and not be aware, since there are not always symptoms. A person with HIV may not develop AIDS for many years. Those who do have symptoms may develop a mild flu 2 to 4 weeks after becoming infected. Doctors can perform a blood test for HIV, but the virus may not show up in the test results until 12 weeks have passed since the infection.

Syphilis is a serious STI caused by bacteria. The only way to know for sure if you have syphilis is for a doctor to perform a blood test. Antibiotics can cure it, but without treatment, serious complications can occur. There are 3 stages to syphilis infection. During the first, symptoms may appear a few weeks after sex and may include a red sore or sores in the parts of the body where sex took place — the penis, anus or mouth. After a few weeks, these sores disappear. Second, a rash may appear on the palm of your hands, soles of your feet or all over your body. You may also feel as if you have the flu. After the symptoms of the second stage you may feel normal, but the infection may linger for up to several years. If left untreated, syphilis may enter the third stage, leading to serious problems such as heart disease, blindness, paralysis, brain damage or death.

What Can You Do?

Take Steps to Protect Yourself

You can reduce your risk of getting an STI by:

If You Think You Have n STI

As well, if you believe you may have an STI, it’s your responsibility to tell your partner. This is crucial so that they can get treatment if the need it and prevent from passing the infection to others. If you’re not sure what to say, ask a doctor or nurse; they can give you suggestions to help bring up the subject. 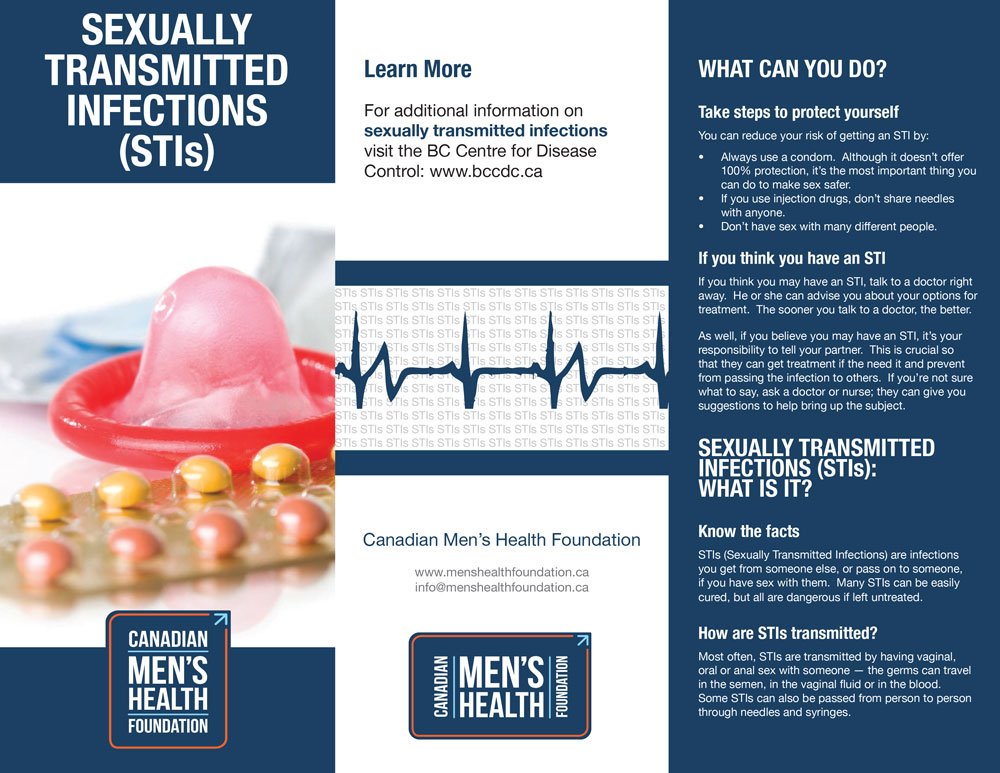