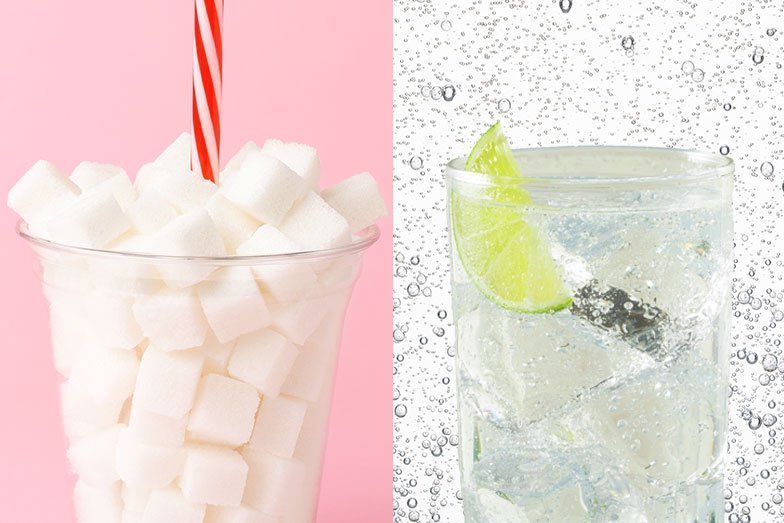 Picture a cola commercial showing beautiful people playing in the sun. The volleyball game pauses, the camera pans over to the tanned models, and each of them proceeds to wolf down 10 spoonfuls of sugar.

That’s essentially what happens when you drink a can of pop, but the billion-dollar beverage-makers aren’t going to show you that. They certainly won’t share the findings of recent research, which reveals that artificially-sweetened “diet” drinks may actually be more dangerous to your health than sugar-packed ones.

The good news: it’s easy to enjoy fizzy beverages without getting stuck between a bad-for-you rock and an unhealthy hard place. Here’s the deal:

Wondering how to drink less sugar and artificial sweeteners? That’s where soda water, a.k.a sparkling or carbonated water, comes in. It typically costs the same or less than pop at the supermarket, and can cost much less in the long run if you make it with one of those inexpensive home-carbonation machines. They’re quick, convenient, easy to use, and proclaim “this guy has his act together!” to anyone in your kitchen. Likewise, many employers are adding these gadgets to break rooms, so ask your boss about getting one. It’ll help everyone at work get healthier while building on your reputation for being generally awesome.

Think soda water has to be flavourless? Think again! It’s easy to add some pizzazz to your bubbly H2O with the many natural additives out there. Squeeze in lemon, lime or orange juice, or get creative by stirring in some fresh mint, cinnamon, sliced cucumber, strawberries, or a few drops of maple syrup. Fizz + flavour = delicious!

Squirt your favorite flavour into your ice cube tray for a soda water booster that’s ready when you are. If you’re craving a sweeter drink, blend up a few strawberries or blueberries and pour the liquid straight into the ice tray for a flavour kick packed with healthy vitamins, fibre and antioxidants.

Swap in some jazzed-up soda water whenever you’d normally drink pop. If you drink pop with lunch at work, for example, soda water with lemon goes great with a sandwich. If afternoon drowsiness calls for cola, some fizz with fresh mint will perk you up just as well if not better! Sometimes you’re stuck with pop as your only option—at the movies, for instance—but treating yourself to one now and then isn’t a big deal. The key is to break the regular habit of drinking pop..

The problem with pop

When you eat a hamburger or drink a beer, both have at last some nutritional value. With pop, you get nothing but empty calories that damage your health. The 30-something grams of sugar in a can of pop account for nearly all your recommended daily intake, and going over this amount on a regular basis can make you gain weight, add to your belly size, send your blood pressure soaring, and increase your chances of developing type 2 diabetes, among other health risks.

Pop, what is it good for? Like the song says: Absolutely nothing! In short, it’s time to drop pop like the bad habit it is.

Do you have a tip for jazzing up soda water? If so, go ahead and share it in the comments below!