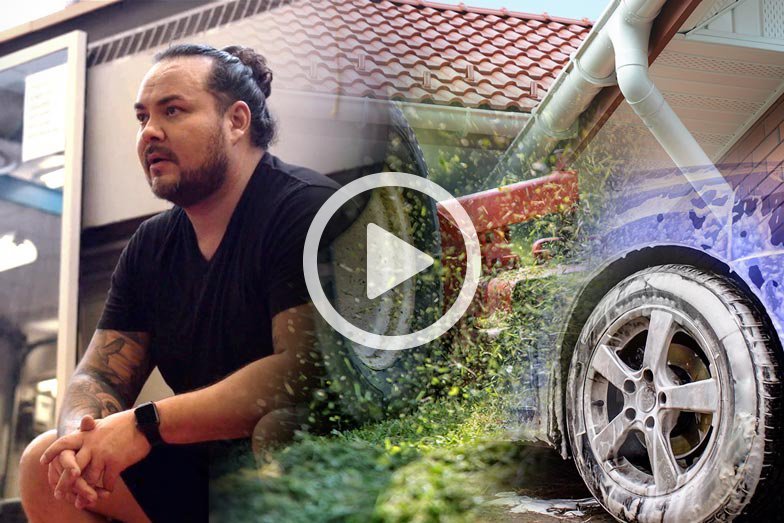 Shelling out big bucks for repairs and renos is the BEST…said no guy ever.

We do our best to get things done around the house and yard — that trash isn’t going to take itself to the curb — but some jobs are best left to professionals. On that note, did you know that wasp nests should NOT be removed with golf clubs? Live and learn!

Allan Laplante, an Ottawa-based father of two, was all set to pay contractors to do a basement renovation. But that was before a medical scare motivated him to lose weight, get more active, and start eating healthier by making small, easy changes to his everyday life.

For Allan, living healthier began with the simplest of exercises: Squats. “I knew I needed to start breaking a sweat and be more physically active, but at my weight the only thing I could do was squats,” Allan explains. “So I just started bending my knees and coming back up again. I did 10 squats while washing dishes, or preparing food, and it just kind of snowballed from there.”

As well as using squats to kick-start a return to the gym, Allan began parking further from where he was going and walking the difference, and taking the stairs instead of the elevator.

Two more small changes — snacking on almonds and walnuts, and drinking plenty of water throughout the day — have helped Allan quit smoking and drinking. “It keeps my mouth busy whenever I have a craving.”

At the same time, he started eating less sugar and salt, and more fruits and vegetables. Allan’s healthy-eating secret weapon: The smoothie. “I wake up, have a coffee, and throw a bunch of plant-based proteins into a blender with some greens and strawberries, blueberries, bananas, whatever I have around. If it’s going bad, I throw it in!”

At dinner, Allan jazzes up vegetables like broccoli by grating Parmesan cheese on top, or adding a bit of hot sauce to brussels sprouts. “With some wild rice and lean chicken, fish or steak, these veggies taste amazing!”

DIY for the win!

Having dropped more than 50 pounds, Allan decided to tackle his basement reno himself. “Now, picking up a pack of 25 floorboards, and going up and down the stairs, aren’t issues for me. I can do the work myself and it’s a great workout, so why pay someone else to do it?”

Then again, he jokes, DIY dominance does have a dark side. “One of my neighbours said to me the other day, ‘I like what you did with your basement. Maybe you can come and do mine!’”

Household chores for the win!

As Allan points out, doing your own home renos saves money and doubles as exercise. The same goes for many household chores: By doing them more quickly or adding extra moves like squats and lunges, you can turn them into legitimate workouts. Here are some tips for turning five common man-chores into fitness routines:

Cleaning the eavestroughs:
Climbing ladders, scooping out leaf goo and raking it up actually burns around 320 calories an hour. Moving the ladder more frequently than usual, and climbing it more often, will boost that number significantly, as will climbing two rungs, descending one, climbing two, and so on. It may look like a scene from Mary Poppins, but who cares what the neighbours think when you have quads and shoulders like The Rock?
Shovelling:
Snow, soil, sand, whatever — swinging a shovel burns more than 400 calories an hour, and if you lift the load to chest height and hold it for 10 seconds it works all your major muscle groups: legs, core, back, shoulders and arms. It may take longer to get the job done, but your significant other will thank you all the more.
Painting:
Mr. Miyagi, the Karate Kid’s mentor, had it right: Whitewashing burns nearly 300 calories an hour. But does a painting project ever take just one hour? Do the math: A day of priming adds up to a serious workout. There may be ladders involved, too, and every time you rise up on your tip-toes to touch up some trim — hold it for a few extra seconds — the burn in your calves is doing them a lot of good. Fire off some squats every time you bend to dip your brush, and the gains keep coming.
Mowing the lawn:
Pushing a gas-powered mower burns 300-plus calories every hour. A manual mower, meanwhile, adds nearly 200 calories to that figure, and while you’re at it, throw in some lunges for good measure (and an extra 200 calories per hour).
Washing the car:
Pampering your beloved vehicle may not match the aforementioned tasks when it comes to calorie burn — it clocks in at around 290 per hour — but there’s plenty of potential to work lunges and squats into the mix. Turn up the Whitesnake, throw on a muscle shirt, invite your significant other to watch, and you never know: Your cheesy display could produce another kind of workout…