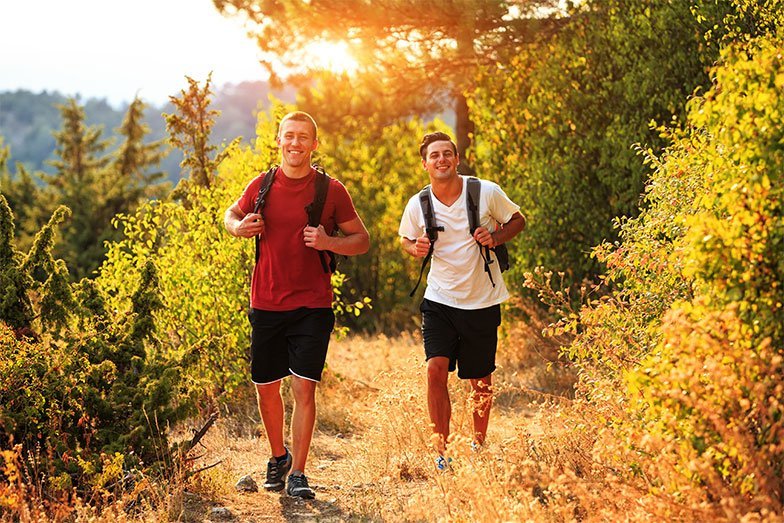 We’ve all heard this sappy line before: “Ten years ago, I married my best friend.”

Now, let’s add a hilarious twist ending: “My wife’s still really mad about it, but me and Dave thought it was funny at the time.”

Of course, before you can jokingly marry your best bud, you need to HAVE a best bud. Thankfully, starting a new “bromance” is easier than you might think. Wondering how to start new friendships with other guys? Here’s how it’s done:

Between work, chores, family and other commitments, carving out enough time to see old friends can be a challenge. That’s why making new friends may sound so difficult. After all, your days of goofing around on the school bus or in detention are long gone.

Start by setting aside one evening each week to be more social, and go from there. Also, be sure to let your significant other know your plans, and assure them that your new schedule won’t take away from existing relationships.

Step 2: Do your thing

Whatever you enjoy doing with your spare time — bowling, watching sports, barbecuing, hiking, chainsaw juggling, the list goes on — chances are there’s a dude-filled club or team in your area that welcomes new members. When guys share common interests, it drastically improves the chances of bonds being formed. Fact is, many bromances develop from guys doing things together that their partners might not care about: Lifting weights at the gym, going to heavy metal concerts, playing video games, you get the idea.

No time to spare? No problem: Your workplace can be a great place to make friends. Working on a project with other guys, trading stories around the water cooler, and joining forces to fix the *&^%ing photocopier are all examples of ways to find common ground.

That said, you don’t have to start a bromance with your clone. Stay open to meeting someone who has different interests and life experiences. After all, that can be half the fun of meeting new people!

If you feel like you’re getting along well with another guy, and think it might be fun to hang out, simply ask him if he’d be into that. Try saying something like, “Hey, do you want to go watch the game on Saturday?” or “I just found this awesome new hiking trail. Wanna check it out?” The key is getting together around common interests, and doing something both of you would naturally be doing in your spare time anyway. Then, if your meet-up goes well, don’t watch the game or hike the trail without making a plan for a follow-up get-together.

There’s more to a solid bromance than letting the good times roll. One of the best things about close buddies is that they support each other through thick and thin, offer honest advice, and are open to talking about topics that are typically off-limits to others. Sometimes, it’s just about being there: If a new friend seems out of sorts, simply asking “Hey man, is something up?” can go a long way towards forging a lasting bromance.

The benefits of bromances

If your significant other objects to you spending too much time with your new guy friend, just point to these awesome health nuggets:

That’s right: Your new buddy might even save your life! What are friends for, right?

Do you have any tips for starting a bromance or finding new buddies? Go ahead and share them in the comments below!

Are you thinking about making healthy changes? If so, we’ve got your back!

Download the free “Blueprint for Better: The 5 Stages for Building a Healthier Life” right now.