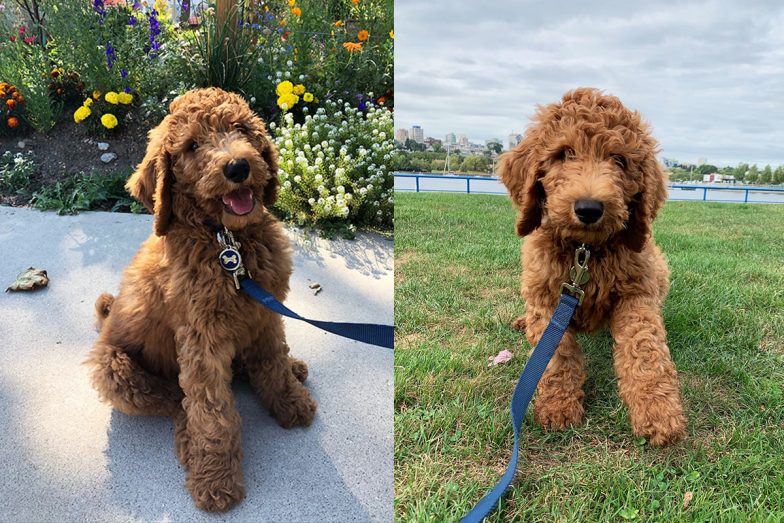 Gus is the gift that keeps on giving.

Don’t Change Much team member Krystal became the proud owner of the adorable puppy in June, when she received Gus as an anniversary present from her husband. “Gus has already brought so much joy to our lives,” Krystal says. “Getting up in the morning to feed, walk and play with him is such a positive way to start the day. It definitely has a calming effect on us before our morning commutes.”

Then there’s Don’t Change Much Champion (and hilarious comedian) Toby Hargrave, who says evening walks with the family dog help him work some easy exercise into his busy routine. “I do the things that work for me, like taking the dog for a longer walk, or taking the stairs instead of the elevator, or parking further from where I’m going and walking there.”

Krystal and Toby aren’t alone in enjoying the “Big Three” health benefits of owning a dog:

Man’s best friend helps with much more than adorable YouTube videos. Research suggests that compared to people who don’t have dogs, the heart rate and blood pressure of dog owners is steadier, and moderates more quickly, during times of stress. This reduces the negative effects of stress on your mind and body.

The calming “pet effect” is powered by touch, with several studies showing that blood pressure goes down when people pet dogs. Owning a dog is also associated with lower cholesterol levels and lower blood pressure generally, likely because of pets’ calming effect, and because dog owners tend to get more exercise. On that note…

A new British study suggests that owning dogs can strongly affect how much people exercise. The dog owners who took part were about four times more likely than other people to walk for at least 150 minutes each week. In fact, dog owners spent nearly 300 minutes each week walking with their dogs, which was about 200 more minutes of walking per week than people without dogs.

Walking briskly for 30 minutes is a legit form of exercise—it burns around 250 calories—with guys who walk five city blocks in a day lowering their risk of heart attack by 25 percent.

Yup, for dog owners, every day is National Dog Day!

Other ways to work in some walking

Taking your dog for a stroll is just one example of how easily walking fits into your daily routine. For instance:

So take your dog’s lead—and his leash if need be—and get out for a walk. It’ll make him happy, and you healthy. If you’re more of a cat person, however, it turns out that owning felines is good for you, too…

See what Gus is up to on Instagram @goldendudegus